The weapon is inseparable from aggression, violence and conflict. It has enormous firepower – it not only changes the fate of individuals, but also of entire countries. Can a dream about a gun to some extent affect our lives?

The weapon that appears in a dream about a soldier, a policeman, a security guard, a hunter or a bandit may be quite normal. They carry guns almost every day, so it is a natural part of their life, which penetrates into the night fantasies. Not always so one specific meaning or symbolism. It is different when it comes to people who do not use a weapon on a daily basis.

If it comes to nightmares about weaponry there can be two attitudes of the dreamer - either defensive or offensive. When you use a gun, knife or sword to defend yourself it means that subconsciously you are afraid of betrayal or some other threat. You do not feel safe in your environment. If in the dream you express the offensive attitude and use a weapon to hurt somebody, then you should carefully think your dream through. For who is the aggression directed? Do you know this person? What are the reasons you threaten him? Is it right? Understanding the source of anger is the key to the interpretation of the dream. Having a weapon is not always associated with anger; sometimes it may simply be an expression of excessive fatigue and rush jobs and responsibilities.

Over the years, a number of interpretations regarding the weapons in a dream were created. Not only do they indicate suppressed emotions such as fear, uncertainty and anger, but also spiritual strength, human powers or even men's sexuality. Sigmund Freud focused on this last issue. Because of the phallic shape of almost every kind of weapon, Freud looked for its sexual symbols. According to the German philosopher a knife that stabs and pierces the body is a reflection of sexual penetration. A gun in turn, symbolizes sexual intercourse and orgasm, symbolised by bullets fired. Freud believed that the fantasies of weapons are a result of insecurity in sex life or reflect aggression. When a man dreams that he attacked a woman, it means that he has an ambivalent attitude to the opposite sex. For a girl this dream is an expression of the fear of men. When the weapon in the dream is broken it is a sign that the dreamer is worried about his sexual performance. This may be, e.g. associated with a long break in sexual contacts, illness or old age.

In a more detailed explanation of dreams about guns, there are many variants.

When you see a gun, knife’s blade flashes or you hear a distinctive gun clang, this is a clear warning to stay alert. For example, you may soon get into a fuss. Buying weapons in the dream is also a warning in this case of trouble with the law. Anyway, one thing is usually associated with the other.

If you get a gun or a knife from someone, or take part in exercises with weapons, then it may herald the future honour, a reward for your good and honest work. Also, cleaning weapons promises pleasant events and situations. Destroyed or useless weapons in a dream do not bode well, because you are deprived of the tools to defend yourself against the enemy. This means that you unsuccessfully protect yourself against adversity or destructive influence of other people. Perhaps your friends or relatives take advantage of you.

When interpreting a fantasy weapons you must also take into account its type, because it also has its importance. The weapon is not just a gun or a machine gun, but a sword, crossbow, bow, knife or grenade. You can find descriptions of individual weapons in this dream book. 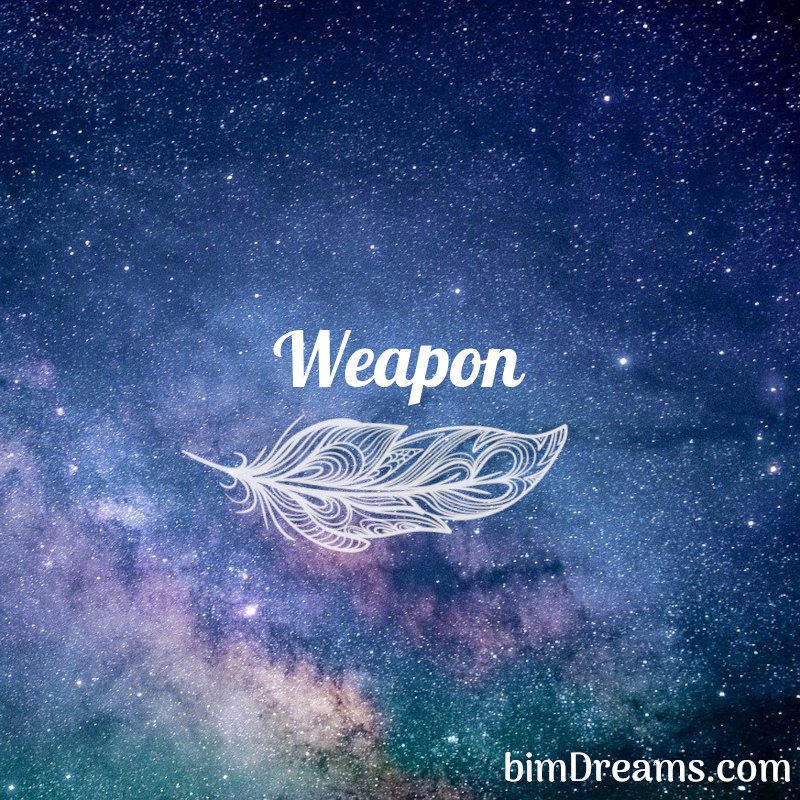